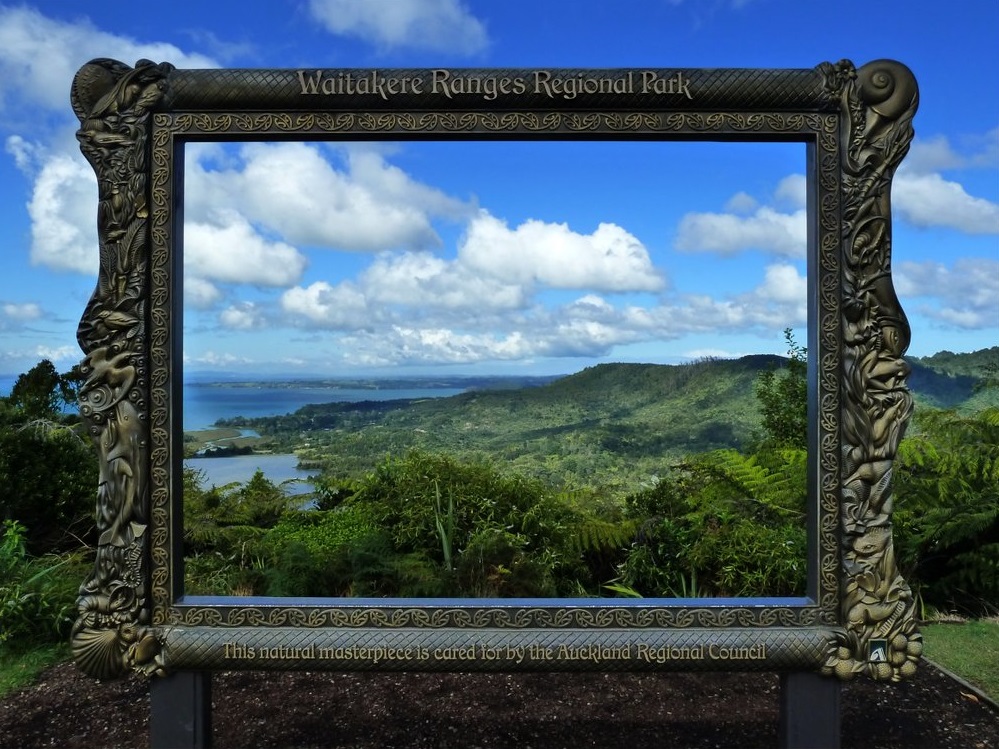 There is something about Auckland that most visitors will never know. It only takes one hour from central Auckland straight into the lush rainforest and black sand beaches of the rugged Auckland coast. And because escaping the bustle of New Zealand’s largest city will be a key priority for nature loving travellers, we went on a Bush and Beach Nature Tour Auckland Wilderness Experience to find out what it was all about.

It is a rainy, grey day with cold easterly winds when Bush and Beach guide Kevin meets up opposite Auckland’s harbour and iconic ferry building. Inside the bus we are greeted by expectant faces of Americans, a Japanese gentleman on a language adventure, two Czech fellows, a kiwi and of course Kevin, the tour guide, who expertly navigates us out of the Auckland urban jungle.

On the way to the Arataki Visitor Center we stop at a bakery to pile up on freshly made pies and other delicacies. Once there, we marvel at Maori carvings, a couple of sleepy geckos, a map of the Waitakere Ranges, a life-sized Moa and Haast eagle, plus the view of two harbours (just about visible through the rain).

The Waitakere Ranges form a natural barrier between Auckland City and the surf lined Tasman Sea on the west coast. The highest point is 474 meters. The Waitakere Ranges Regional Park was formed in 1940, and measures about 180 square kms or 70 square miles.

During our drive along narrow roads surrounded by dense vegetation (native forest), Kevin, a local who’s been living in the Ranges many years, tells us stories about the land and its people. We visit a spectacular waterfall, even more beautiful in rain. Further west we get a glimpse of the wild and rugged west coast at Piha Beach (famous for a TV series of lifesavers being filmed here). Another beach, Karekare, has attracted worldwide attention when the Oscar winning movie “The Piano” was shot there in 1993.

The tour continues with an easy walk in the lush rainforest. We come across a majestic kauri tree and some of the other unique flora and fauna that has evolved over the millions of years that New Zealand has been separated from the rest of the world.

Kevin tells us about giant ferns and wood pigeons, silver ferns (New Zealand’s national symbol), nikau palms, rimu and pohutukawa (christmas trees) – and the problematic possum, which has become such a threat to NZ’s endemic flora and fauna.

About Bush and Beach Tours in Auckland

As Qualmark Enviro Gold certified tourism business, Bush and Beach is also among the most environmentally friendly and sustainable tour operators in Auckland, which of course is why we picked them in the first place! For example, apart from minimizing their impact on the environment, Bush and Beach contributes directly to the conservation of natural areas by sponsoring Ark in the Park – to help eradicate pests in the rainforest.

Bush and Beach also sponsors noxious weed bins in the community to prevent their regeneration and spread. Local communities get the benefit of having local initiatives sponsored, such as the Karekare Beach Races – that support the local school and surf club.

Like our review of Bush and Beach Nature Tour in Auckland, New Zealand? Share and spread the word!

GreenCityTrips.com offers you travel tips and inspiration for your next city trip, with a focus on authentic experiences, local recommendations and responsible tourism.

Brought to you by the makers of the Sustainability Leaders Project.

You like to check reviews of hotels before you book? Thank you for supporting GreenCityTrips by booking your next hotel through booking.com. Price will be the same for you but we receive a small commission 🙂

This website uses cookies to improve your experience while you navigate through the website. Out of these, the cookies that are categorized as necessary are stored on your browser as they are essential for the working of basic functionalities of the website. We also use third-party cookies that help us analyze and understand how you use this website. These cookies will be stored in your browser only with your consent. You also have the option to opt-out of these cookies. But opting out of some of these cookies may affect your browsing experience.
Necessary Always Enabled

Any cookies that may not be particularly necessary for the website to function and is used specifically to collect user personal data via analytics, ads, other embedded contents are termed as non-necessary cookies. It is mandatory to procure user consent prior to running these cookies on your website.